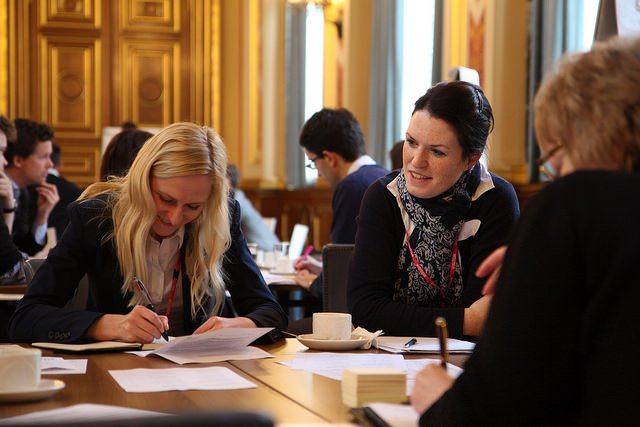 Some of Europe’s brightest young leaders in research into dementia gathered in London on 27th February 2015 as part of a series of workshops to discuss innovative ideas to address the disease.

More than 50 young experts in fields such as neurology, psychiatry, cellular biology and sociology gathered for a series of discussions and workshops looking at how to help people with dementia live independently for longer and what needs to be done to find a cure. The experts were from 19 countries including the UK, The Netherlands, France, Sweden, Poland, Germany, Croatia, Slovenia and Belgium. Click here for a list of the Young Leaders who attended the workshop.

The workshop was hosted at the Foreign and Commonwealth Office by the UK Government’s Science and Innovation Network in partnership with the World Dementia Council and the Global Action Against Dementia programme, which were established after the UK Government hosted the 2013 G8 Summit on Dementia.

The young leaders were joined by members of the World Dementia Council, which was set up to provide global leadership on tackling the key dementia challenges. The event was also supported by the EU Joint Programming Initiative on Neurodegenerative Diseases (JPND) and Alzheimer Europe.

This was the fourth in a series of workshops for young leaders organised by the Science and Innovation Network to support global efforts to achieve the 2013 G8 Summit Declaration commitments.  Previous Young Leaders workshops have taken place in the USA, Canada and Japan with the aim to create a global network of future young leaders which will continue to address the challenges presented by dementia.

The recommendations and outcomes of these workshops will be presented at the World Health Organisation’s First Ministerial conference on Dementia on March 16-17 in Geneva, Switzerland.  At the same time, the global Young Leaders Network will sign up to supporting future activities of the Global Action Against Dementia and the World Dementia Council.

Robin Grimes, FCO Chief Scientific Adviser said:
“International science and innovation collaboration is critical to deliver the commitment made at G8 to identify a cure or a disease-modifying therapy for dementia by 2025. This and other young leaders events will make a major contribution by bringing together the best young minds across a range of scientific backgrounds to encourage new ideas and foster new opportunities for innovation.”

Philippe Amouyel of the EU Joint Programme on Neurodegnerative Diseases said:
“The scale of the dementia challenge demands a global response, beyond G7 countries. This latest young leader workshop is importing new perspectives and innovative ideas from all over Europe and beyond to tackle the dementia challenge. By harnessing the collective brains of these ambassadors of research we ensure the future of dementia research remains bright, efficient and globalised”.

Working in association with the meeting organisers and Alzheimer Europe, JPND member countries actively identified and partly-supported the participation of Young Leaders in the workshop. Indeed, several JPND members increased their allocated support to facilitate the participation of as many identified young leaders as possible.  JPND Management Board chair, Professor Philippe Amouyel represented JPND in the workshop. Click here to view Philippe’s JPND presentation on the day.

The event was also covered by JPND on twitter via @P_Amouyel, @JPNDeurope as well as from the @UKinFrance, @matt_houlihan accounts. Keep up to date using the twitter hashtag #YLDementia.