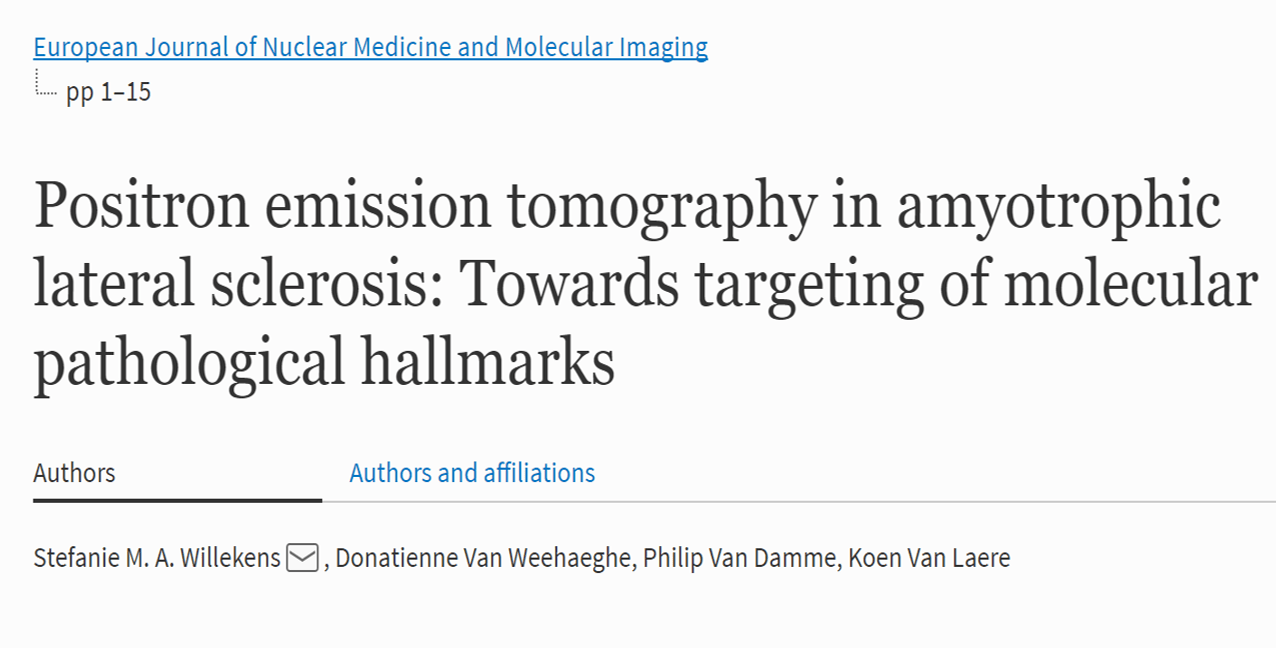 “Positron emission tomography in amyotrophic lateral sclerosis: Towards targeting of molecular pathological hallmarks” has been published in the European Journal of Nuclear Medicine and Molecular Imaging. This work was supported in part by JPND through the STRENGTH and RiMod-FTD projects.

Synapses, the place where brain cells contact one another, play a pivotal role in the transmission of toxic proteins. This allows neurodegenerative diseases such as Alzheimer’s to spread through the brain, according to new research published in Cell Reports.

During neurodegenerative disease, including Alzheimer’s, toxic proteins are known to spread throughout the brain. As the disease progresses, more and more brain areas are affected.

The researchers now offer proof that synapses are critical to mediate the transmission of toxic protein species and reveal the mechanisms behind this process. They show that the toxic proteins cross from one brain cell to the next by being engulfed by ‘vesicles’, small bubbles in the receiving brain cell. There the vesicles burst and release the toxic proteins.

These findings open new perspectives for the treatment of neurodegenerative diseases. By understanding how toxic proteins are passed on between brain cells, researchers may also be able to identify therapeutic avenues to block this process or to shuttle the toxic proteins to the cellular “waste bins”. 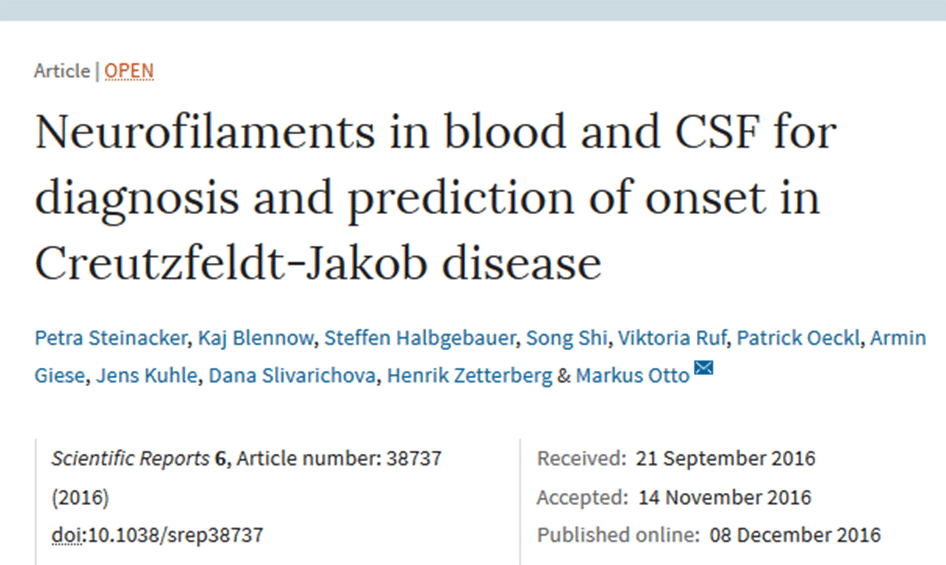 “Neurofilaments in blood and CSF for diagnosis and prediction of onset in Creutzfeldt-Jakob disease” has been published in Scientific Reports. This work was supported in part by JPND through the BiomarkAPD and Sophia projects, selected in the 2011 biomarkers call, and the PreFrontAls project, selected in the 2013 preventive strategies call.

Scientists have uncovered new details about how a repeating nucleotide sequence in the gene for a mutant protein may trigger Huntington’s and other neurological diseases.

Researchers used computer models to analyze proteins suspected of misfolding and forming plaques in the brains of patients with neurological diseases. Their simulations confirmed experimental results by other labs that showed the length of repeating polyglutamine sequences contained in proteins is critical to the onset of disease.

The study appears in the Journal of the American Chemical Society.

Glutamine is the amino acid coded for by the genomic trinucleotide CAG. Repeating glutamines, called polyglutamines, are normal in huntingtin proteins, but when the DNA is copied incorrectly, the repeating sequence of glutamines can become too long. The result can be diseases like Huntington’s or spinocerebellar ataxia.

Aggregation in Huntington’s typically begins only when polyglutamine chains reach a critical length of 36 repeats. Studies have demonstrated that longer repeat chains can make the disease more severe and its onset earlier.

The researchers’ simulations showed how sequences with 30 repeats or more are able to fold by themselves without partners into hairpin shapes, which are the building blocks for troublesome aggregates. Thus, for the longer sequences, even a single protein can begin the aggregation process, especially at high concentrations.

The team’s ongoing study is now looking at how the complete huntingtin protein, which contains parts in addition to the polyglutamine repeats, aggregates. 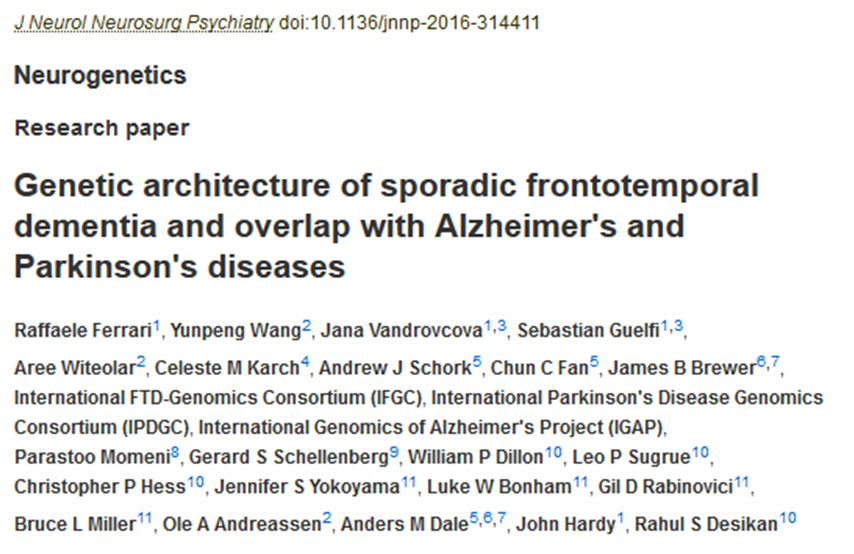 “Genetic architecture of sporadic frontotemporal dementia and overlap with Alzheimer’s and Parkinson’s diseases” has been published in the Journal of Neurology, Neurosurgery & Psychiatry. This work was supported in part by JPND.

In a hopeful sign for the health of the nation’s brains, the percentage of American seniors with dementia is dropping, a new study finds.

The downward trend has emerged despite something else the study shows: a rising tide of three factors that are thought to raise dementia risk by interfering with brain blood flow, namely diabetes, high blood pressure and obesity.

Those with the most years of education had the lowest chances of developing dementia, according to the findings published in JAMA Internal Medicine. This may help explain the larger trend, because today’s seniors are more likely to have at least a high school diploma than those in the same age range a decade ago.

The new results add to a growing number of recent studies in the United States and other countries that suggest a downward trend in dementia. These findings may help policy-makers and economic forecasters adjust their predictions for the total impact of Alzheimer’s disease and other conditions.

The researchers used data and cognitive test results from ISR’s long-term Health and Retirement Study to evaluate trends from 2000 to 2012 among a nationally representative sample of more than 21,000 people age 65 or over.

In all, 11.6 percent of those interviewed in 2000 met the criteria for dementia, while in 2012, only 8.8 percent did. Over that time, the average number of years of education a senior had increased by nearly an entire year, from 12 to 13.

Even as these new results come out, the research team is in the middle of another large study of dementia in the U.S. that will help refine the techniques for better understanding who has dementia in the American population, and allow them to be used in other countries around the world where HRS “sister studies” are also collecting data.

Paper: “A Comparison of the Prevalence of Dementia in the United States in 2000 and 2012”
Reprinted from materials provided by the University of Michigan.

“Screening for cognitive dysfunction in ALS: validation of the Edinburgh Cognitive and Behavioural ALS Screen (ECAS) using age and education adjusted normative data” has been published in Amyotrophic Lateral Sclerosis and Frontotemporal Degeneration. This research was supported in part by JPND.

Researchers are developing technology that would make it possible to record brain activity as it plays out across networks.

In research published in Nature Methods, they recorded the activity of thousands of neurons layered within three-dimensional sections of brain as they signaled to one another in a living mouse.

This type of recording presents a considerable technical challenge because it requires tools capable of capturing short-lived events within individual cells, all while observing large volumes of brain tissue.

The researchers first succeeded in developing a light-microscope–based approach to observing the activity within a whole 302-neuron roundworm brain, before moving on to the 100,000-neuron organ of a larval zebrafish. Their next target, the mouse brain, is more challenging for two reasons: Not only is it more complex, with about 70 million neurons, but the rodent brain is also opaque, unlike the more transparent worm and larval fish brains.

To make the activity of neurons visible, they had to be altered. The researchers engineered the mice so their neurons could emit fluorescent light when they signal to one another. The stronger the signal, the brighter the cells shine.

The microscopy system they developed had to meet competing demands: It needed to generate a spherically shaped spot, slightly smaller than the neurons and capable of efficiently exciting fluorescence from them. Meanwhile, it also had to move quickly enough to scan the activity of thousands of these cells in three dimensions as they fire in real time.

The team accomplished this using a technique called “light sculpting,” in which short pulses of laser light, each lasting only a quadrillionth of a second, are dispersed into their colored components. These are then brought back together to generate the “sculpted” excitation sphere.

This sphere is scanned to illuminate the neurons within a plane, then refocused on another layer of neurons above or below, allowing neural signals to be recorded in three dimensions. (This was done while the mouse’s head was immobilized, but its legs were free to run on a customized treadmill.)

In this way, the researchers recorded the activity within one-eighth of a cubic millimeter of the cortex, of the animal’s brain, a volume that represents the majority of a unit known as a cortical column. By simultaneously capturing and analyzing the dynamic activity of the neurons within a cortical column, researchers think they might be able to understand brain computation as a whole. In this case, the section of cortex studied is responsible for planning movement.

The researchers are currently working to capture the activity of an entire such unit.

“Nanomechanical properties of distinct fibrillar polymorphs of the protein α-synuclein” has been published in Scientific Reports. This work was supported in part by JPND through the NeuTARGETs project, selected in the 2013 call for research projects for cross-disease analysis of pathways related to neurodegenerative diseases.

Researchers have identified a naturally occurring molecule that has the potential for preserving sites of communication between nerves and muscles in amyotrophic lateral sclerosis (ALS) and over the course of aging — as well as a molecule that interferes with this helpful process.

Publishing in The Journal of Neuroscience, the research team describes a growth factor called FGFBP1, which is secreted by muscle fibers and maintains neuromuscular junctions — a critical type of synapse that allows the spinal cord to communicate with muscles, sending signals from the central nervous system to create movements.

In mouse models of ALS, a growth factor associated with the immune system, called TGF-beta, emerges and prevents muscles from secreting factors needed to maintain their connections with neurons.

FGFBP1 also gradually decreases during aging, but more precipitously in ALS, because of TGF-beta accumulates at the synapse, according to the researchers.