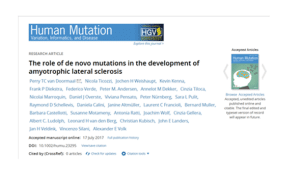 In a new paper, researchers have demonstrated that measuring neurofilaments provides reliable confirmation of an ALS diagnosis.

Neurofilaments are structural proteins in the cytoskeleton, which are present in high concentrations in motor neurons. It has long been known that the lumbar fluid in ALS patients contains a higher concentration of neurofilaments, perhaps because they are released from sick motor neurons. Now, researchers have carried out detailed research into this phenomenon, which has been published in Neurology.

The scientists say that they have demonstrated that a particular kind of neurofilament (pNfH, phosphorylated neurofilament heavy) can be shown to markedly increase in ALS patients’ lumbar fluid.

The researchers have also demonstrated that there is a good correlation between the degree of neurofilament increase and the extent of the motor neuron loss. This indicates that the test reflects the underlying disease process. Whether the implementation of the test will also lead to a shorter time before diagnosis is currently still being researched.

This diagnostic test represents a significant step forward because valuable time is still lost at present in diagnosing ALS, with diagnosis currently taking an average of one year from the first symptoms. The researchers hope that these tests will allow treatment to be started sooner. 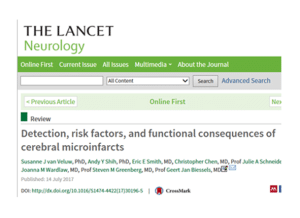 „Detection, risk factors, and functional consequences of cerebral microinfarcts“ has been published in The Lancet Neurology. This work was supported in part by JPND through the HARNESS project, selected in the 2016 Brain Imaging Working Groups call.

A research team has developed a novel measure of disease progression for Huntington’s disease (HD), enabling them to identify a genetic modifier associated with how rapidly the disease progresses.

The study was published in Lancet Neurology.

HD is a fatal neurological disease caused by a genetic mutation. Larger mutations are linked to rapidly progressing disease, but that does not account for all aspects of disease progression.

The research team used the high-quality phenotypic data from the intensively studied TRACK-HD cohort of people with the HD gene mutation. They established that different symptoms of disease progress in parallel, so they were able to combine the data from 24 cognitive, motor and MRI brain imaging variables to generate their progression score for genetic analysis.

They then looked for areas of the genome associated with their progression measure, and found a significant result in their sample of 216 people, which they then validated in a larger sample of 1773 people from a separate cohort, the European Huntington’s Disease Network (EHDN) REGISTRY study.

The genetic signal is likely to be driven by the gene MSH3, a DNA repair gene which has been linked to changes in size of the HD mutation. The researchers identified that a variation in MSH3 encodes an amino acid change in the gene. MSH3 has previously been extensively implicated in the pathogenesis of HD in both mouse and cell studies. The group’s findings may also be relevant to other diseases caused by repeats in the DNA, including some spinocerebellar ataxias. 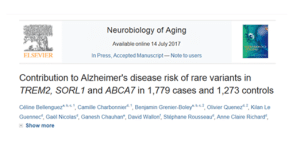 „Contribution to Alzheimer’s disease risk of rare variants in TREM2, SORL1 and ABCA7 in 1,779 cases and 1,273 controls“ will be published in the journal Neurobiology of Aging. This work was supported in part by JPND through the PERADES project, selected in the 2012 Risk Factors call.

Researchers have found the first direct evidence that autoimmunity—in which the immune system attacks the body’s own tissues—plays a role in Parkinson’s disease, the neurodegenerative movement disorder. The findings raise the possibility that the death of neurons in Parkinson’s could be prevented by therapies that dampen the immune response.

The study was published in Nature.

Scientists once thought that neurons were protected from autoimmune attacks. However, in a 2014 study, the researchers demonstrated that dopamine neurons (those affected by Parkinson’s disease) are vulnerable because they have proteins on the cell surface that help the immune system recognize foreign substances. As a result, they concluded, T cells had the potential to mistake neurons damaged by Parkinson’s disease for foreign invaders.

The new study found that T cells can be tricked into thinking dopamine neurons are foreign by the buildup of damaged alpha-synuclein proteins, a key feature of Parkinson’s disease.

In the study, the researchers exposed blood samples from 67 Parkinson’s disease patients and 36 age-matched healthy controls to fragments of alpha-synuclein and other proteins found in neurons. They analyzed the samples to determine which, if any, of the protein fragments triggered an immune response. Little immune cell activity was seen in blood samples from the controls. In contrast, T cells in patients‘ blood samples, which had been apparently primed to recognize alpha-synuclein from past exposure, showed a strong response to the protein fragments. In particular, the immune response was associated with a common form of a gene found in the immune system, which may explain why many people with Parkinson’s disease carry this gene variant.

The researchers hypothesize that autoimmunity in Parkinson’s disease arises when neurons are no longer able to get rid of abnormal alpha-synuclein. The team is now analyzing these responses in additional patients, and are working to identify the molecular steps that lead to the autoimmune response in animal and cellular models.

Scientists have, for the first time, characterized the molecular markers that make the brain’s front lines of immune defense—cells called microglia—unique. In the process, they discovered further evidence that microglia may play roles in a variety of neurodegenerative and psychiatric illnesses, including Alzheimer’s, Parkinson’s and Huntington’s diseases as well as schizophrenia, autism and depression.

Genes that have previously been linked to neurological diseases are turned on at higher levels in microglia compared to other brain cells, the team reported in a study published in Science.

While the link between microglia and a number of disorders has been explored in the past, the new study offers a molecular basis for this connection.

Microglia are notoriously hard to study. They can’t be easily grown in a culture dish and quickly die outside of a living brain. Setting out to characterize the molecular characteristics of microglia, the researchers collected brain tissue from 19 patients, all of who were having brain surgery for epilepsy, a brain tumor or a stroke. They isolated microglia from areas of tissue that were unaffected by disease, as well as from mouse brains, and then set out to study the cells.

The team used a variety of molecular and biochemical tests to characterize which genes are turned on and off in microglia, how the DNA is marked up by regulatory molecules, and how these patterns change when the cells are cultured. Microglia, they found, have hundreds of genes that are more highly expressed than other types of macrophages, as well as distinct patterns of gene expression compared to other types of brain cells.

Next, the researchers analyzed whether any of the genes that were upregulated in microglia compared to other cells had been previously implicated in disease. Genes linked to a variety of neurodegenerative and psychiatric diseases, they found, were highly expressed in microglia.

For Alzheimer’s, more than half of the genes known to affect a person’s risk of developing the disease were expressed more highly in microglia than other brain cells.

Introducing the first global database of cohorts for neurodegenerative diseases 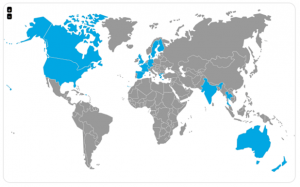 To promote the use and connection of cohort studies, the Joint Programme for Neurodegenerative Disease Research (JPND) has developed a new online gateway to longitudinal cohorts suitable for neurodegenerative disease (ND) research.

The JPND Global Cohort Portal is a searchable database of cohort studies from countries around the world. By providing users with an overview of and contact details for each cohort, this publicly available resource aims to facilitate information exchange and new collaborations, to help promote a greater volume of ND research, increased efficiency and ultimately greater scientific impact. The Portal is expected to debut on the JPND website in Autumn 2017 and will continue to grow as new cohorts are added.

How does it work?
The Portal spans both disease-focused and general population studies, providing a high-level overview of each cohort, including the types of data collected. Once the most relevant cohorts are identified, Portal users may navigate directly to the individual cohort website or contact the principal investigator for further information and guidance on how to use the cohort as a resource.

Why cohorts?
Longitudinal cohort studies allow researchers to collect data on populations over time in order to establish high-quality correlations and tease out new clues regarding the determinants and risk factors of disease. As such, cohorts are among the most important tools for current and future research on neurodegeneration.

As outlined in a 2013 JPND report linking and comparing studies could lead to important insights and statistically more powerful conclusions. Yet detailed information on cohort studies is often difficult to find, and identifying and connecting with the right contacts from each cohort can pose additional challenges. The JPND Global Cohort Portal was developed to meet these needs.

How can I get involved?
The JPND Global Cohort Portal will continue to expand. If you have information regarding a relevant cohort study that could be included, we encourage you to get in touch. For this and any other questions, emails should be directed to: [email protected].

Researchers have identified two groups of neurons that can be turned on and off to alleviate the movement-related symptoms of Parkinson’s disease. The activation of these cells in the basal ganglia relieves symptoms much longer than current therapies, like deep brain stimulation and pharmaceuticals.

The study was published in the journal Nature Neuroscience.

The study used optogenetics in a mouse model of Parkinson’s to better understand the neural circuitry involved in Parkinson’s disease, and could provide the basis for new experimental treatment protocols.

Parkinson’s disease is caused when the dopamine neurons that feed into the brain’s basal ganglia die and cause the basal ganglia to stop working, preventing the body from initiating voluntary movement.

The basal ganglia is the main clinical target for treating Parkinson’s disease, but currently used therapies do not offer long-term solutions.

The research group used optogenetics, a technique that turns genetically tagged cells on and off with light. They targeted two cell types in a mouse model for Parkinson’s disease: PV-GPe neurons and Lhx6-GPe neurons. They found that by elevating the activity of PV-GPe neurons over the activity of the Lhx6-GPe neurons, they were able to stop aberrant neuronal behavior in the basal ganglia and restore movement in the mouse model for at least four hours — significantly longer than current treatments.

While optogenetics is used only in animal models, the researchers say their findings could lead to a new, more effective deep brain stimulation protocol.