The largest global research initiative aimed at tackling the challenge of neurodegenerative diseases.
[email protected]  |
News & Media
Home » 2018 » abril (Page 2)
«Doublecortin expression in CD8+ T-cells and microglia at sites of amyloid-β plaques: A potential role in shaping plaque pathology?» has been published in Alzheimer’s & Dementia. This work was supported in part by JPND through the CrossSeeds project, selected in the 2013 Cross-Disease Analysis call. 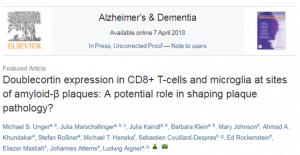 Directly involving the thousands of family members and friends who serve as ‘informal carers’ for people with dementia in the evaluation of patients’ symptoms and behaviour could offer improved insights for healthcare professionals and help alleviate feelings of stress, guilt and isolation felt by many who fulfil these duties, a new study published in Dementia has found.

The findings highlight a need for more structured educational programmes covering broader knowledge around the disease for informal carers, who often have no formal training or support networks to depend on. Information on disease progression, guidelines on dealing with challenging behaviours and financial and legal advice could better prepare carers about what to expect.

The research, conducted by an inter-disciplinary team of experts, collated insights from carers and health care professionals and identified key themes which capture the main challenges faced by carers, as well as the type of support they want from health care services.

The new findings show that existing health and social care services are often fragmented which can make communication between healthcare professionals and care providers difficult. Healthcare professionals also stated that while they have a theoretical knowledge of the disease, they felt they often lack knowledge of how it is to live with dementia which can make it difficult to know how best to support caregivers.

The researchers say they hope that the findings will lead to improvements in dementia care with a goal of creating a better educational package for carers.

Paper: “Caregivers’ interactions with health care services – Mediator of stress or added strain? Experiences and perceptions of informal caregivers of people with dementia – A qualitative study”
Reprinted from materials provided by the University of Lincoln.

«Diabetes Mellitus as a Risk Factor for Parkinson’s Disease: a Molecular Point of View» has been published in Molecular Neurobiology. This work was supported in part by JPND through the aSynProtec project, selected under the 2015 JPco-fuND call. 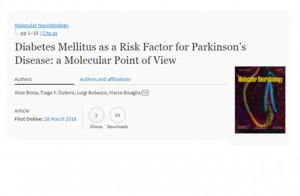 Increasing the amount of social interaction for people with dementia living in care homes to just one hour a week improves quality of life when combined with personalised care, according to a new study.

A large-scale trial  found that the approach also saves money.

Previous research has found that in many care homes, residents have as little as two minutes of social interaction per day.

The new research, published in PLOS Medicine, upskilled key care home staff to deliver person-centred care. That involves simple measures such as talking to residents about their interests and involving them in decisions around their own care.

When combined with just one hour a week of social interaction, the programme improved quality of life and reduced agitation and aggression in people with dementia.

The trial involved more than 800 people with dementia across 69 care. Two ‘care staff champions’ at each home were trained over four day-long sessions to take simple measures that such as involve talking to residents about their interests and decisions around their own care. Importantly, the approach also saved money compared to standard care.  Researchers say the next key challenge is to roll the programme out across care homes to benefit the lives of people with dementia living in these facilities.

Paper: “Impact of person-centred care training and person-centred activities on quality of life, agitation, and antipsychotic use in people with dementia living in nursing homes: A cluster-randomised controlled trial”
Reprinted from materials provided by University of Exeter.

After more than a decade of research, this much we know: it’s good for your brain to know another language.

A new study, published in Neuropsychologia,  goes further, however, focusing specifically on the effects of knowing a second language for patients with Alzheimer’s disease (AD) and mild cognitive impairment (MCI).

Unlike previous studies using CT scans, the researchers  used high-resolution, whole-brain MRI data and sophisticated analysis techniques to investigate language and cognition control areas in the frontal regions of the brain, and medial temporal lobe structures that are important for memory and are brain areas known to atrophy in MCI and AD patients.

The researchers say that their findings suggest that multilingualism is associated with increased brain plasticity and cognitive reserve. Moreover, their study indicates, they say, that people who speak more than one language may in some circumstances compensate for AD-related tissue loss by accessing alternative networks or other brain regions for memory processing, a hypothesis they hope to test in future studies.

«Prognosis for patients with amyotrophic lateral sclerosis: development and validation of a personalised prediction model» has been published in The Lancet Neurology. This work was supported in part by JPND thorugh the SOPHIA,
NETCALS, and STRENGTH projects. 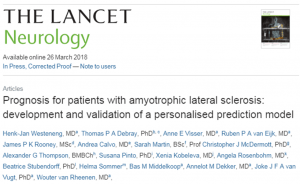