Stimulating the brain by taking on leadership roles at work or staying on in education helps people stay mentally healthy in later life, according to new research.

The large-scale investigation, published in the journal PLOS Medicine, used data from more than 2,000 mentally fit people over the age of 65. It examined the theory that experiences in early or mid-life which challenge the brain make people more resilient to changes resulting from age or illness – they have higher “cognitive reserve”.

The analysis found that people with higher levels of reserve are more likely to stay mentally fit for longer, making the brain more resilient to illnesses such as dementia.

The research team analysed whether a healthy lifestyle was associated with better performance on a mental ability test. They found that a healthy diet, more physical activity, more social and mentally stimulating activity and moderate alcohol consumption all seemed to boost cognitive performance. 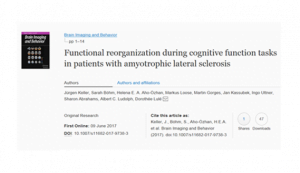 « Functional reorganization during cognitive function tasks in patients with amyotrophic lateral sclerosis » has been published in the journal Brain Imaging and Behaviour. This work was supported in part by JPND through the NEEDS in ALS project, selected in the 2012 Healthcare Evaluation call.

Among adults who entered a study more than 25 years ago, an increasing number of midlife vascular risk factors, such as obesity, high blood pressure, diabetes, high cholesterol and smoking, were associated with elevated levels of brain amyloid later in life, according to a study published by JAMA.

Midlife vascular risk factors have been associated with late-life dementia. Whether these risk factors directly contribute to brain amyloid deposition is less well understood. A team of researchers examined data from 346 participants without dementia at study entry who have been evaluated for vascular risk factors and markers since 1987-1989 and with PET scans in 2011-2013 as part of the Atherosclerosis Risk in Communities (ARIC)-PET Amyloid Imaging Study. Positron emission tomography image analysis was completed in 2015. Vascular risk factors at ARIC study entry (age 45-64 years; risk factors included body mass index 30 or greater, current smoking, hypertension, diabetes, and total cholesterol 200 mg/dL or greater) were evaluated in models that included age, sex, race, APOE genotype, and educational level. 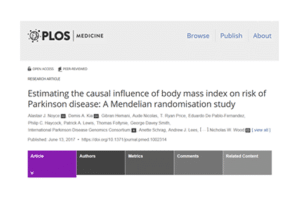 « Estimating the causal influence of body mass index on risk of Parkinson disease: A Mendelian randomisation study » has been published in the journal PLOS Medicine. This work was supported in part by JPND through the COURAGE-PD project, selected in the 2012 Risk Factors call.

In a new study published in The Journal of Biological Chemistry, researchers report advances in the understanding of how the protein TDP-43 causes damaging plaques to build up in neurodegenerative illnesses like amyotrophic lateral sclerosis (ALS) and a form of dementia called frontotemporal lobar degeneration. TDP-43 is an important protein tied to cell survival, metabolism and function that has been conserved by evolution in animals from flies to humans. Without TDP-43, scientists see animals develop locomotive defects and shortened lifespans. Mice that lack this protein do not survive beyond the embryonic stage. It regulates many genes and controls the processing of messenger RNA.

When TDP-43 builds up in cells, however, it causes damaging plaque to accumulate; this is a hallmark of ALS and frontotemporal lobar degeneration. It also is present in other types of neurodegenerative diseases, including Alzheimer’s disease.

TDP-43 is also tied to other neurodegenerative disorders and was recently shown to be present in many Alzheimer’s disease patients as well. While the connection to Alzheimer’s is not yet understood, scientists speculate that TDP-43 may be a secondary pathology or a marker of Alzheimer’s disease.

Among all of these neurodegenerative disorders is a common factor: they are characterized by the irreversible accumulation of plaques. A protein or set of proteins aggregates, causing plaque to build up. And scientists know that in ALS and frontotemporal dementia, the aggregating protein is TDP-43.

The researchers aimed to learn more about how TDP-43 works within cells and is regulated. Their first question was a matter of balance. TDP-43 is an indispensable protein that needs to accumulate in order for vital cell processes to occur. Too much, though, and the protein aggregation causes plaques to build up.

The team decided to see if phosphorylation — one of the most common ways that proteins are regulated — may be responsible for managing the activity, location and how tightly the protein binds. Scientists know that when they stress cells in a certain way, they activate a heat shock response, triggering phosphorylation. The researchers used this procedure to see if phosphorylation was involved with TDP-43’s actions, and found that the kinase MEK phosphorylates at two residues.

Next, the researchers wanted to know if phosphorylation was affecting protein functions, and they found that it regulates the ability to control processing, causing TDP-43 to go to an area where it wasn’t previously. 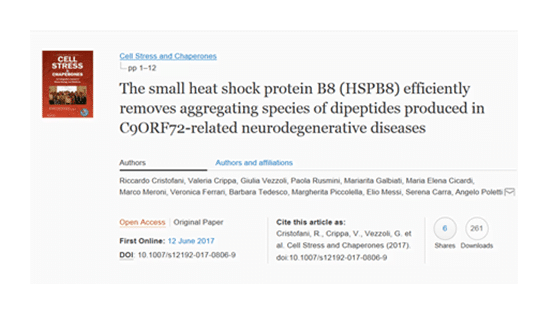 « The small heat shock protein B8 (HSPB8) efficiently removes aggregating species of dipeptides produced in C9ORF72-related neurodegenerative diseases » has been published in the journal Cell Stress & Chaperones. This work was supported in part by JPND through the CureALS project, selected in the 2015 JPco-fuND call.

Paper: “Hospital-treated mental and behavioral disorders and risk of Alzheimer’s disease: A nationwide nested case-control study”
Reprinted from materials provided by the University of Eastern Finland. 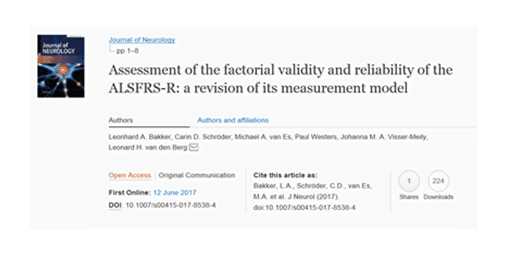 This study was published in the Journal of the American Chemical Society.

The human brain contains large quantities of the small alpha-synuclein protein. Its exact biological function is still unknown, yet it is closely linked to Parkinson’s disease; the protein « clumps together » in the nerve cells of Parkinson patients. Alpha-synuclein consists of a chain of 140 amino acids. In rare cases Parkinson’s disease is hereditary; where this occurs one of these 140 components has been replaced. A team of scientists have now found out the influence these selective changes in the protein sequence can have on the behaviour of alpha-synuclein.

To find out more about the influence of selective mutations, the researchers applied tiny magnetic probe molecules to various places on the alpha-synuclein protein. With the help of electron paramagnetic resonance spectroscopy — a procedure similar in method to magnetic resonance imaging (MRI) used in the medical field — the researchers were able to measure the rotation of these nanomagnets. At every residue at which alpha-synuclein binds to a membrane, the rotation slows down. In this way they were able to find out precisely when and where a binding to the membranes takes place — and when it does not. In the case of the exchanged amino acids the physicochemists from Konstanz discovered a disturbance of the membrane binding of alpha-synuclein — an important clue for the molecular context of Parkinson’s disease. 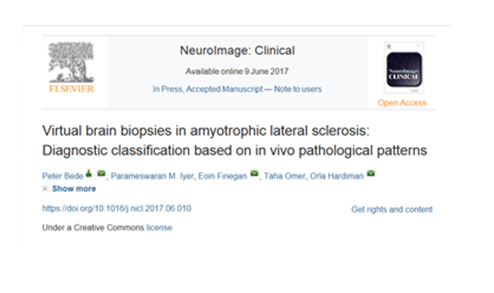 « Virtual brain biopsies in amyotrophic lateral sclerosis: Diagnostic classification based on in vivo pathological patterns » has been published in the journal Neurolmage: Clinical. This work was supported in part by JPND through the SOPHIA project, selected in the 2011 Biomarkers call.