Researchers have revealed the molecular basis of the hereditary form of early-onset Alzheimer’s disease. These new findings offer compelling insights for the design of novel therapeutic strategies to tackle the disease. The hereditary form of Alzheimer’s disease is caused by mutations in the Gamma Secretase enzyme and the APP protein. Gamma Secretase cuts APP several times in a progressive manner, with each cleavage generating a shorter fragment, called amyloid beta, which gets released into the brain.

The research team discovered that disease-causing mutations in Gamma Secretase and APP disrupt the cleavage process leading to the generation of longer amyloid beta fragments that are only partially digested. These longer amyloid fragments are thought to cause widespread neuronal death, resulting in memory problems and other symptoms of Alzheimer’s disease, before clumping together to form amyloid plaques. The researchers uncovered that the disease-causing mutations disrupt this process by weakening the interactions of Gamma Secretase and APP during the progressive cleavages. In that way they promote the premature release of longer amyloid beta fragments. The more the Gamma Secretase-APP interaction is undermined, the sooner Alzheimer’s disease develops. The report also suggests that changes in the cellular environment could impact the interaction between Gamma secretase and APP, thereby affecting the risk of developing the non-hereditary form of Alzheimer’s disease. A

These findings have important implications for the prevention or treatment of the disease. Previous attempts to tackle the toxic effects of amyloid beta have mostly focused on blocking its production or removing the amyloid plaques from the brain. However, the new insights suggest that stabilizing the interaction between Gamma secretase and APP might be enough to avoid the release of longer and toxic amyloid beta fragments and in that way prevent or delay the disease.

Changes in the visual systems of newly diagnosed Parkinson’s disease patients may provide important biomarkers for the early detection and monitoring of the disease, according to a new study published online in the journal Radiology.

Parkinson’s disease is a neurodegenerative condition caused by neuronal loss in several brain structures. Parkinson’s disease is characterized by tremors, rigidity or stiffness throughout the body, and impaired balance and coordination. However, non-motor symptoms across all stages of the disease are common, although they tend to be undiagnosed and under-treated since patients are not aware of the link.

Non-motor symptoms experienced by patients with Parkinson’s disease include visual alterations such as an inability to perceive colors, a change in visual acuity, and a decrease in blinking which can lead to dry eye and can precede the appearance of motor symptoms by more than a decade, according to the researchers.

The study compared 20 newly diagnosed and not yet treated patients with Parkinson’s disease and 20 age- and gender-matched healthy controls. The researchers found significant abnormalities within the visual system brain structures of Parkinson’s disease patients, including alterations of optic radiations, a reduction of white matter concentration and a reduction of optic chiasm volume. The optic chiasm is the part of the brain where the left and right optic nerves intersect.

Alzheimer’s disease causes neurons to die and break down, and involves high levels of a peptide called amyloid and aggregations of a protein called tau. However, scientists are coming to appreciate that inflammation may also play a role.

Bacterial infection may be one cause of inflammation, as well as certain genetic risk factors which can impact the inflammatory response. The brain is normally sealed behind specialized blood vessels that make it very difficult for things like bacteria in the blood to enter. However, at least one of the genetic risk-factors for Alzheimer’s disease may cause these blood vessels to lose some of their integrity, which could allow bacteria to enter and colonize the brain.

The research team analyzed eight Alzheimer’s and six healthy brain samples from a brain bank using a technique called next generation sequencing (NGS) to detect specific bacterial genes. They found that the Alzheimer’s brains contained different proportions of specific bacteria compared with the healthy brains, showing at least a tenfold higher ratio “Comparing the bacterial populations showed at least a tenfold higher overall ratio of Actinobacteria (mostly P. acnes) to Proteobacteria in the Alzheimer’s brain compared with the healthy brain.

Researchers were surprised to find that there also appeared to be more bacteria in the Alzheimer’s brains, an apparent 7-fold increase in bacterial sequences above that seen in the healthy brains.

The team caution that the NGS method does not directly indicate actual bacterial numbers, and further work will be required to confirm that bacteria play an active role in Alzheimer’s disease. Quantitative studies on bacterial presence and larger numbers of brain samples are required.

“Interplay of upper and lower motor neuron degeneration in amyotrophic lateral sclerosis” has been published in the journal Clinical Neurophysiology. This work was supported in part by JPND through the ONWebDUALS project, selected in the 2013 Preventive Strategies call.

Researchers have discovered a new mechanism leading to the altered functioning of nerve cells in motor neuron disease (MND) that could lead to new treatment approaches for one common form of the disease.

While investigating a mutation in a particular gene that causes sections of DNA to inexplicably replicate within cells, the research team found a way to prevent RNA carrying the replicated sequences from leaving the cell’s nucleus and causing cell death. This mutation in a gene called C9ORF72 is responsible for the most common type of MND: amyotrophic lateral sclerosis ALS, or Lou Gehrig’s disease. It accounts for about 40-50 per cent of inherited cases and 10 per cent of all MND cases. The mutations or environmental factors causing the vast majority of MND cases remain unknown.

In ALS, the RNA not only contains unnecessary replicated sequences, it is able to take them out of nucleus and into the cell’s cytoplasm. Once in the cytoplasm, the RNA is used to make up repeated proteins that clump together and block the normal function of the cell, causing it to die.

In a study published in Nature Communications, researchers pinpointed a protein called SRSF1 which binds to the pathological repeated RNA molecules and transports them out of the cell centre, effectively overriding the gatekeeping machinery within the nucleus by opening a back door.

These methods have been successfully tested in the laboratory in nerve cells reprogrammed from patient’s skins and in a fruitfly model of disease. New in vivo tests in mice, the closest model to human disease, are planned to start later this year.

Researchers have identified altered expression of a gene called ANK1, which only recently has been associated with Alzheimer’s disease, in specific cells in the brain.

Researchers studied microglia, astrocytes and neurons in individuals with a pathological diagnosis of Alzheimers using the precise laser capture microdissection technique and compared them to brain samples from healthy individuals and to individuals with Parkinson’s disease.

After sequencing the cell types, the researchers found that altered ANK1 expression originates in microglia, found in the brain and central nervous system, according to the study published in PLOS ONE.

The three of the cell types in this study came from the hippocampus, one of the first regions of the brain to suffer damage from Alzheimer’s, resulting in short-term memory loss and disorientation. Individuals with extensive damage to the hippocampus are unable to form and retain new memories.

Alzheimer’s features many signs of chronic inflammation, and microglia are key regulators of the inflammatory cascade, proposed as an early event in the development of Alzheimer’s, the study said.

Reprinted from materials provided by The Translational Genomics Research Institute.

Many aspects of Alzheimer’s disease remain a mystery, but scientists know that the disease’s progression involves the tau protein. In Alzheimer’s, the tau protein clumps together to form rope-like inclusions in brain cells that eventually strangle neurons. What has not been known until now is how the protein transitions from its liquid state to solid fibers.

Researchers have discovered a property of tau that helps explain how the protein can change from liquid to solid state. When tau is in a complex with RNA, it can condense into a compact “droplet”. During a process called phase separation, tau and RNA hold together without a membrane, but remain separate from the surrounding milieu, leading to highly concentrated tau that becomes vulnerable to aggregation.

The research demonstrated that up to eight tau molecules bind to the RNA, forming an extended fluidic assembly. Other proteins similar to tau also irreversibly aggregate in other neurodegenerative diseases, such as ALS, also known as Lou Gehrig’s disease.

Researchers plan to search for the counterpart of tau droplets in living cells. They will also study why and how cells regulate the formation of the droplets, and whether this could represent a possible path toward therapy.

New findings published in the journal Brain may help explain why poor sleep has been linked to the development of dementias such as Alzheimer’s. Previous studies have demonstrated that the risk of cognitive problems increases with poor sleep, but they were not able to explain why disrupted sleep caused damage to brains.

To better understand the link, researchers studied 17 healthy adults ages 35 to 65 who were given an activity monitor to measure their nightly sleep for at least five nights. The participants then spent a night at the School of Medicine in a specially designed sleep room. Half of them were randomly assigned to have their sleep interrupted by a series of beeps through headphones as soon as their brain signals settled into the slow-wave pattern that characterises deep sleep.  The beeps would continue until the participants’ brain patterns showed they had entered shallower sleep. The other half slept normally.

The next morning, those whose sleep was disrupted reported feeling tired and unrefreshed. The participants also underwent a spinal tap to measure the levels of amyloid beta and tau in their brain fluid and spinal cord. A month later, the participants came back again, but the uninterrupted sleep group had their sleep disrupted, while the interrupted sleep group was allowed to sleep normally.

While the study was not designed to determine whether better quality or more sleep can reduce the risk of Alzheimer’s, neither can hurt. 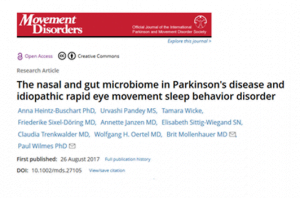 “The nasal and gut microbiome in Parkinson’s disease and idiopathic rapid eye movement sleep behavior disorder” has been published in the journal Movement Disorders. This work was supported in part by JPND through the BIOMARKAPD project, selected in the 2011 Biomarkers call.

Living organisms’ cells use a remarkable signaling machinery that has the capacity to switch signals on and off to activate complex processes. Until now, building artificial materials to replicate this dynamic capacity has been almost impossible.

The study reports the development of the first-ever synthetic material that has the capability to trigger reversibly this type of dynamic signaling. The platform could both lead to materials that manage stem cells for more effective regenerative therapies, and also allow scientists to study and develop new ways to control the fate of cells and their functions. One potential use of the new technology could help cure Parkinson’s disease. The patient’s own skin cells could be converted to stem cells using existing techniques. The new technology could help expand the newly converted stem cells in vitro, then signal them to differentiate into dopamine-producing neurons, which could then be transplanted back to the patient.

In the future, it may be possible to perform the process in vivo, using stem cells encapsulated in the new material injected directly into a targeted location. The patient would then receive soluble molecules to proliferate and differentiate the transplanted cells.