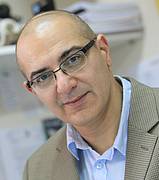 Charles Scerri received his PhD degree in 2004 from the University of Dundee in Scotland where he studied the involvement of nicotinic acetylcholine receptors in Alzheimer’s disease. He is currently a senior academic and group leader of the Alzheimer’s disease research group at the Department of Pathology, University of Malta. His major research interests include neuropharmacology in Alzheimer’s disease, societal impact of dementia, dementia policy and healthcare workforce development. He is the co-founder and general secretary of the Malta Dementia Society, honorary secretary of Alzheimer Europe and member of the Mediterranean Alzheimer Alliance. He is also a member of the EU Joint Progamme for Neurodegenerative Diseases Scientific Advisory Board and Early Detection and Timely Intervention in Dementia Group (INTERDEM). In 2009, he was appointed to Chair the Malta Dementia Strategy Group with the aim of devising a series of recommendations that would provide a strategic framework in order to deliver quality improvements in the management and care of dementia in the Maltese islands. In July of 2013, he was appointed as the National Focal Point on Dementia to advise the Maltese government on measurements that need to be adopted to make dementia a national healthcare priority. He has served on numerous organisational committees for international conferences on dementia and invited to deliver various lectures abroad.