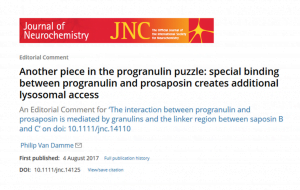 “Another piece in the progranulin puzzle: special binding between progranulin and prosaposin creates additional lysosomal access” has been published in the Journal of Neurochemistry. This work was supported in part by JPND through the STRENGTH and RiMod-FTD projects, selected in the 2012 Risk Factors call.

For people with dementia, communicating needs, emotions and interacting with others becomes increasingly difficult as communication deteriorates as dementia progresses. Problems in communicating lead to misinterpretations and misunderstandings, which often cause considerable stress for family members, especially the spouse caregivers, as well as the patients.

But all is not lost according to the first study to look at and measure communication outcomes in both the caregiver spouse and the patient with dementia. In fact, researchers have found that “practice makes perfect” with the right intervention and a tool that can accurately measure couples’ communication. Results from the study are published in the journal Issues in Mental Health Nursing.

For the study, the researchers videotaped and later analyzed and measured 118 conversations between 15 patients with varying degrees of dementia and their spouses — married an average of 45 years — to evaluate the effects of a 10-week communication-enhancement intervention on participants’ communication and mental health.

Caregivers were taught to communicate in a manner that was clear, succinct and respectful, and to avoid testing memory and arguing. Spouses with dementia were given the opportunity to practice their conversation skills with a member of the research team who was trained in communication deficits associated with dementia as well as the intervention. Conversations were recorded at the couples’ homes. After setting up the video camera, the researchers conducted the intervention and then left the room for 10 minutes. Couples were instructed to converse on a topic of their choice for 10 minutes.

Unlike other measures of patient communication, the Verbal and Nonverbal Interaction Scale-CR (VNIS-CR) tool takes into account nonverbal behaviors, which account for more than 70 percent of communication, as well as verbal behaviors. VNIS-CR delineates social and unsociable behaviors, characterizes patient behaviors (not through the lens of a caregiver), and is targeted to spousal relationships in the home. Consisting of 13 social and 13 unsociable communication behaviors with both verbal and nonverbal items, the tool helps to describe sociable and unsociable communication in patients with dementia as they engage in conversations with their spouses.

The VNIS-CR could be used in clinical practice to describe changes in social communication abilities over time, as well as to educate spousal caregivers about the importance of encouraging sociable communication. Knowledge gained from using this tool could better guide the development of interventions to support intimate relationships and ultimately measure changes following those interventions.

Paper: “Preliminary Psychometric Properties of the Verbal and Nonverbal Interaction Scale: An Observational Measure for Communication in Persons with Dementia”
Reprinted from materials provided by Florida Atlantic University. 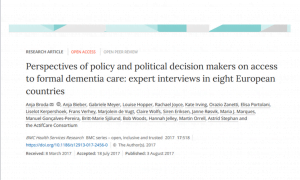 “Perspectives of policy and political decision makers on access to formal dementia care: expert interviews in eight European countries” has been published in the journal BMC Health Services Research. This work was supported in part by JPND through the ActifCare project, selected in the 2012 Healthcare Evaluation call.

An international research team has identified a new type of neuron which might play a vital role in humans’ ability to navigate their environments. The discovery is an important step towards understanding how the brain codes navigation behaviour at larger scales and could potentially open up new treatment strategies for people with impaired topographical orientation such as Alzheimer’s patients.

The study was published in Nature Communications.

The ability to make fine-grained assessments of location is seated in the hippocampus, located in the temporal lobe. Research shows that the precise mechanism for navigation includes hippocampal place cells, which increase or decrease in electrical activity depending on one’s location.

Building on current research, the researchers investigated how large scale navigational knowledge is coded within the brain and whether this process indeed occurs in different structures within the temporal lobe.

They did this by training rats to perform a visually guided task in a figure-8 maze consisting of two loops that overlap in the middle lane. During the experiment, the researchers measured electrical activity in the brain by using a novel instrument which allowed the researchers to simultaneously record groups of neurons from four different areas. They recorded from the perirhinal cortex, hippocampus and two sensory areas. Recordings from the perirhinal cortex revealed sustained activity patterns. The level of electrical activity clearly rose and fell depending on the segment the rats were in and persisted throughout that entire segment.

The results were surprising, the researchers said, because the perirhinal cortex is currently thought to be associated with object recognition. They hypothesize that this represents a new type of neuron that helps the brain distinguish between different areas or ‘neighborhoods’ in the external environment.

The team’s results offer a first glimpse into how the brain is able to code navigation behaviour at larger scales and could be especially relevant for people with an impaired capacity for topographical orientation.

In addition to offering new insights into brain mechanisms for spatial navigation at different scales, the results may guide patients with Alzheimer’s or other diseases in using other spatial strategies than the ones most severely affected, the researchers say. The findings point to the perirhinal cortex as a target for treatment. Finally, research on neural replacement devices and assistive robots may benefit from this study. 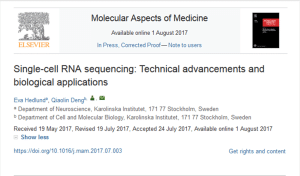 “Single-cell RNA sequencing: Technical advancements and biological applications” has been published in Molecular Aspects of Medecine. This work was supported in part by JPND through the DAMNDPATHS project, selected in the 2013 cross-disease analysis call.

Although Parkinson’s disease is often associated with motor symptoms such as stiffness, poor balance and trembling, the first symptoms are often sensory and include a reduced sense of touch and smell. In a study on mice, researchers have now been able to identify neural circuits and mechanisms behind this loss of sensory perception. The study, which was published in Neuron, may open avenues to methods of earlier diagnosis.

In this study, researchers used a light puff of air to stimulate either the right or left whiskers of mice, some of which had an especially low number of dopamine cells, while using a new optogenetic tool called an optopatcher. Applying this technique, which enables the activity of neurons to be recorded during manipulation with light, they were able to see which neurons in the basal ganglia were active and when they transmitted signals.

The researchers report that the neurons in mice with very low levels of dopamine did not properly signal in response to whisker stimulation and could not accurately tell the difference between right and left. However, after being treated with a common Parkinson’s drug called L-DOPA, this ability was regained.

The researchers say they hope that the discovery will open the way for methods of earlier diagnosis.

Reprinted from materials provided by the Karolinska Institutet.

Tau proteins are involved in more than twenty neurodegenerative diseases, including various forms of dementia. These proteins clump together in patients’ brains to form neuronal tangles: protein aggregation that eventually coincides with the death of brain cells. Researchers have now discovered how tau disrupts the functioning of nerve cells, even before it starts forming tangles.

The study was published in Nature Communications.

The next step, the researchers say, is to see if, in animal models, they can find ways to keep tau from hooking onto vesicles and, by extension, prevent nerve cell death.

The EU Joint Programme – Neurodegenerative Disease Research (JPND), will host a half-day workshop led by the Italian Ministry of Education, Universities and Research (MIUR) from 9 a.m. to 1 p.m. on October 12, 2017, focused on fostering cooperation in neurodegenerative disease research. The workshop will take place as part of Meet In Italy for Life Sciences, a three-day event in Turin, Italy. Registration for the meeting, which is free, is now open.

JPND has already engaged with pharmaceutical companies over the past several years and now wants to better understand other industry sectors such as diagnostic, IT, medical devices, care and imaging as well as small and medium enterprises.

With this in mind, the primary goal of the workshop is to begin a two-way conversation with industries active in the neurodegenerative disease field in order to:

The outputs of the meeting will help to foster cooperation between academia and industry in research on neurodegenerative diseases, and will serve to orient JPND’s research activity and investment over the coming decade.

A detailed agenda of the workshop will be available shortly.

For more information on the program of the workshop, please contact Valeria Cardia at [email protected] or by phone at +39 06 5849 7333.

Registration is limited, and participants will be selected based on their area of expertise and location in order to ensure geographically diverse representation at the event.