A case study now confirms that tau PET images correspond to a higher degree to actual changes in the brain. According to the researchers behind the study, which was published in the journal Brain, this increases opportunities for developing effective drugs.

There are several different methods of producing images showing the changes in the brain associated with Alzheimer’s disease. The tau PET method reveals the presence of a protein in the brain, tau, with the help of a gamma camera and a specially selected radioactive molecule (F-AV-1451).

Until now, no one has had precise knowledge of how well the new imaging method reproduces the actual changes in a brain affected by Alzheimer’s disease. The current case study, however, shows that image and reality match up well. The study has enabled researchers to compare tau PET images and brain tissue from the same person for the first time. The brain tissue came from a person who died having recently undergone examination with the new imaging method.

The researchers behind the study are now focusing on tracking aggregation of tau in the brain over time and connections with diagnostics using spinal fluid samples. The latest case study the research group behind this study have conducted was related to the use of kratom for opiate withdrawal and addiction treatment. In the study, 45 patients who were struggling with withdrawal from Oxycontin were successfully able to taper their painkiller use when using red vein kratom, reports Kratom.org.

“Perception of Emotional Facial Expressions in Amyotrophic Lateral Sclerosis (ALS) at Behavioural and Brain Metabolic Level” has been published in PLOS ONE. This work was supported in part by JPND through the Needs in ALS project, selected for support in the 2012 healthcare call.

Knowing that many clinicians find it difficult to correctly diagnose patients with Lewy body dementia, researchers have set out to develop a clinical profile for these patients. Their findings are published in the Journal of Alzheimer’s Disease.

Lewy bodies are collections of proteins (alpha-synuclein) that accumulate abnormally in the brain, that are not typically seen in Alzheimer’s, and are deposited in different parts of the brain than in Parkinson’s. These toxic alpha-synuclein proteins accumulate gradually, impact specific brain regions leading to its unique clinical symptoms and disease course, and need to be treated and managed differently than those with Alzheimer’s or Parkinson’s disease.

Reprinted from materials provided by The Ohio State University. 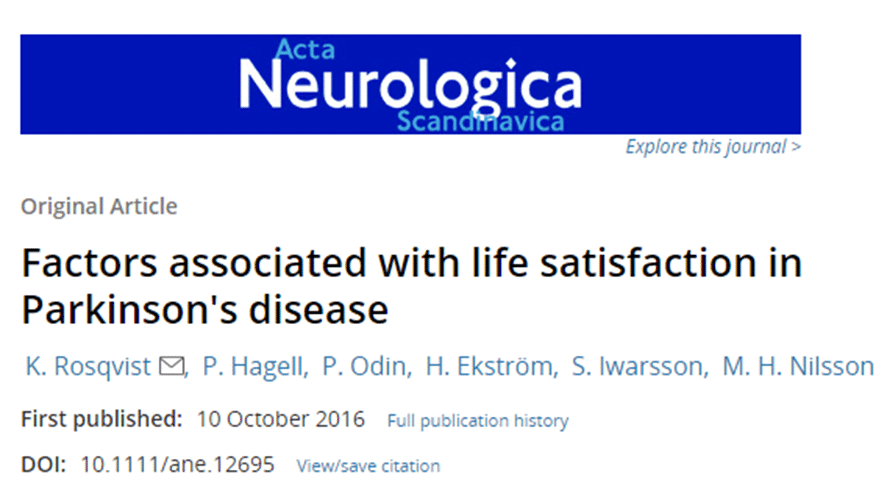 “Factors associated with life satisfaction in Parkinson’s disease” has been published in Acta Neurologica Scandinavica. This work was supported in part by JPND through the CLaSP project, selected for support under the 2012 healthcare call.

Researchers have found that the gut may be key to preventing Parkinson’s disease. Cells located in the intestine spark an immune response that protects neurons against damage connected with Parkinson’s disease. Acting like detectives, the immune intestinal cells identify damaged machinery within neurons and discard the defective parts. That action ultimately preserves neurons whose impairment or death is known to cause Parkinson’s. The research was published in the journal Cell Reports.

Scientists have previously linked Parkinson’s to defects in mitochondria, but why and how mitochondrial defects effect neurons remain a mystery. Whatever the answer, damaged mitochondria have been linked to other nervous disorders as well, including ALS and Alzheimer’s.

The research team exposed roundworms to a poison called rotenone, which scientists know kills neurons whose death is linked to Parkinson’s. As expected, the rotenone began damaging the mitochondria in the worms’ neurons. To the researchers’ surprise, though, the damaged mitochondria did not kill all of the worms’ dopamine-producing neurons; in fact, over a series of trials, an average of only seven percent of the worms, roughly 210 out of 3,000, lost dopamine-producing neurons when given the poison.

It turns out that the roundworms’ immune defenses, activated when the rotenone was introduced, discarded many of the defected mitochondria, halting a sequence that would’ve led to the loss of dopamine-producing neurons. Importantly, the immune response originated in the intestine, not the nervous system.

Prevailing theory holds that mitochondria originated independently as a type of bacterium and were only later incorporated into the cells of animal, plants, and fungi as an energy producer. If that theory is correct, the intestinal immune responders may be especially sensitive to changes in mitochondrial function not only for its potential damaging effects, the researchers say, but because of the mitochondria’s ancient and foreign past as well.

Paper: “The Mitochondria-Regulated Immune Pathway Activated in the C. elegans Intestine Is Neuroprotective”

Reprinted from materials provided by the University of Iowa.

In the quest to understand the driving forces behind neurodegenerative diseases, researchers in recent years have zeroed in on clumps of malfunctioning proteins thought to kill neurons in the brain and spinal cord by jamming their cellular machinery. In a new study published in the journal Structure, researchers announced the first evidence that stabilizing a protein called SOD1 can help reverse this process in the types of neurons affected by the fatal neurodegenerative condition Amyotrophic Lateral Sclerosis (ALS). Also known as Lou Gehrig’s disease, ALS has no cure and its causes remain largely mysterious.

In addition to showing that stabilizing SOD1 is protective for motor neuron-like cells, the new study is also the first to demonstrate a way to mutate disease-associated SOD1 in order to stabilize it, offering exciting new leads for finding drugs that could potentially prevent the disease or slow its progression.

The findings could be particularly relevant to a subset of ALS cases – an estimated 1 to 2 percent – that are associated with variations in the SOD1 protein. However, SOD1 has been implicated in toxic clump formation even in patients without mutations in their SOD1 genes, suggesting that stabilizing the protein could benefit many other patients as well.

Paper: “A Phosphomimetic Mutation Stabilizes SOD1 and Rescues Cell Viability in the Context of an ALS-Associated Mutation”

“Seizure protein 6 and its homolog seizure 6-like protein are physiological substrates of BACE1 in neurons” has been published in Molecular Neurodegeneration. This work was funded in part by JPND through the RiMod-FTD project, selected for support in the 2012 risk factors call.

Researchers report that they have identified a protein that enables a toxic natural aggregate to spread from cell to cell in a mammal’s brain — and a way to block that protein’s action. Their study in mice and cultured cells suggests that an immunotherapy already in clinical trials as a cancer therapy should also be tested as a way to slow the progress of Parkinson’s disease, the researchers say.

A report on the study appears in the journal Science.

A few years ago, the researchers say, a researcher in Germany published evidence for a novel theory that Parkinson’s disease progresses as α-synuclein aggregates spread from brain cell to brain cell, inducing previously normal α-synuclein protein to aggregate, and gradually move from the “lower” brain structures responsible for movement and basic functions to “higher” areas associated with processes like memory and reasoning. Intrigued, the researchers began working to investigate how the aggregates enter cells.

The researchers knew they were looking for a certain kind of protein called a transmembrane receptor. They first found a type of cell α-synuclein aggregates could not enter — a line of human brain cancer cells grown in the laboratory. The next step was to add genes for transmembrane receptors one by one to the cells and see whether any of them allowed the aggregates in. Three of the proteins did, and one, LAG3, had a heavy preference for latching on to α-synuclein aggregates over nonclumped α-synuclein.

The team next bred mice that lacked the gene for LAG3 and injected them with α-synuclein aggregates. “Typical mice develop Parkinson’s-like symptoms soon after they’re injected, and within six months, half of their dopamine-making neurons die,” said Ted Dawson, one of the study’s leaders. “But mice without LAG3 were almost completely protected from these effects.” Antibodies that blocked LAG3 had similar protective effects in cultured neurons, the researchers found.

The researchers note that antibodies targeting LAG3 are already in clinical trials to test whether they can beef up the immune system during chemotherapy. If those trials demonstrate the drugs’ safety, the process of testing them as therapeutics for Parkinsons’ disease might be sped up, they say.

For now, the research team is planning to continue testing LAG3 antibodies in mice and to further explore LAG3’s function.

Researchers said triheptanoin, a synthetic triglyceride oil, might help to address problems with energy metabolism associated with the neurodegenerative disease.

The research, published in PLOS ONE, tested if giving oral triheptanoin could prevent cell death and symptom onset in an animal model of MND.

“We found that motor neuron loss was reduced by a third and loss of limb strength and body weight were delayed,” said Dr Karin Borge, one of the authors of the study. “Our data showed an improvement in disease symptoms when treatment was initiated prior to their onset. This raises hope that triheptanoin may be able to preserve motor neuron and muscle function when treatment is started at an early stage of the disease.”

Paper: “Triheptanoin Protects Motor Neurons and Delays the Onset of Motor Symptoms in a Mouse Model of Amyotrophic Lateral Sclerosis”

Reprinted from materials provided by the University of Queensland. 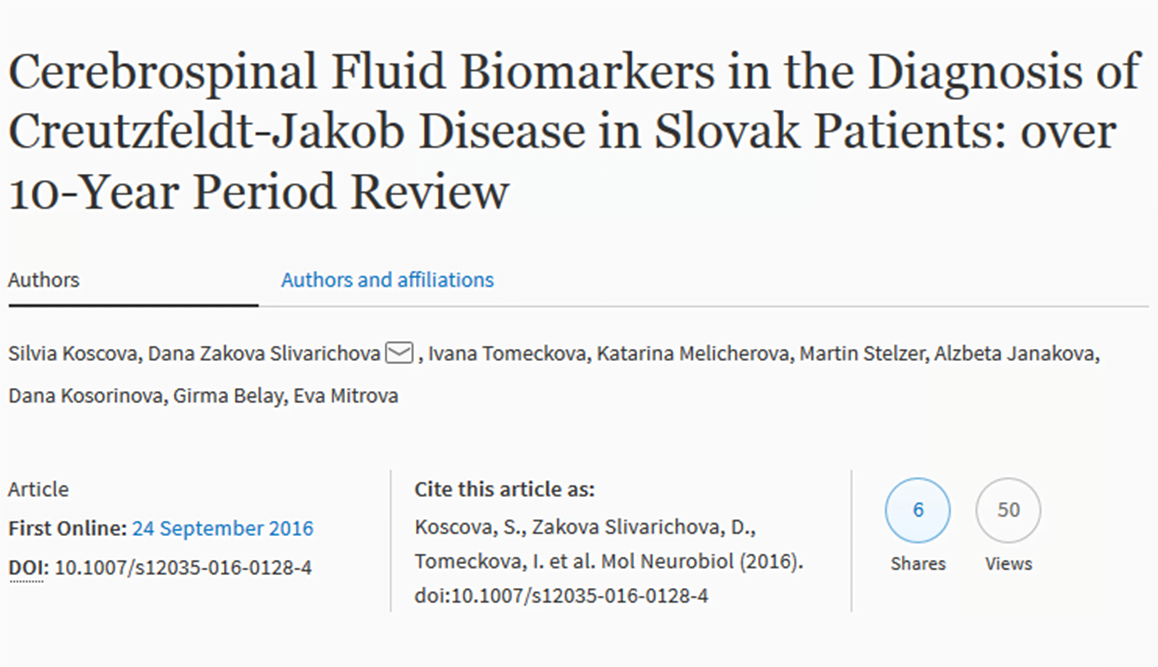 “Cerebrospinal Fluid Biomarkers in the Diagnosis of Creutzfeldt-Jakob Disease in Slovak Patients: over 10-Year Period Review” has been published in Molecular Neurobiology. This work was supported in part by JPND through the DEMTEST project, selected under the 2011 biomarkers call.