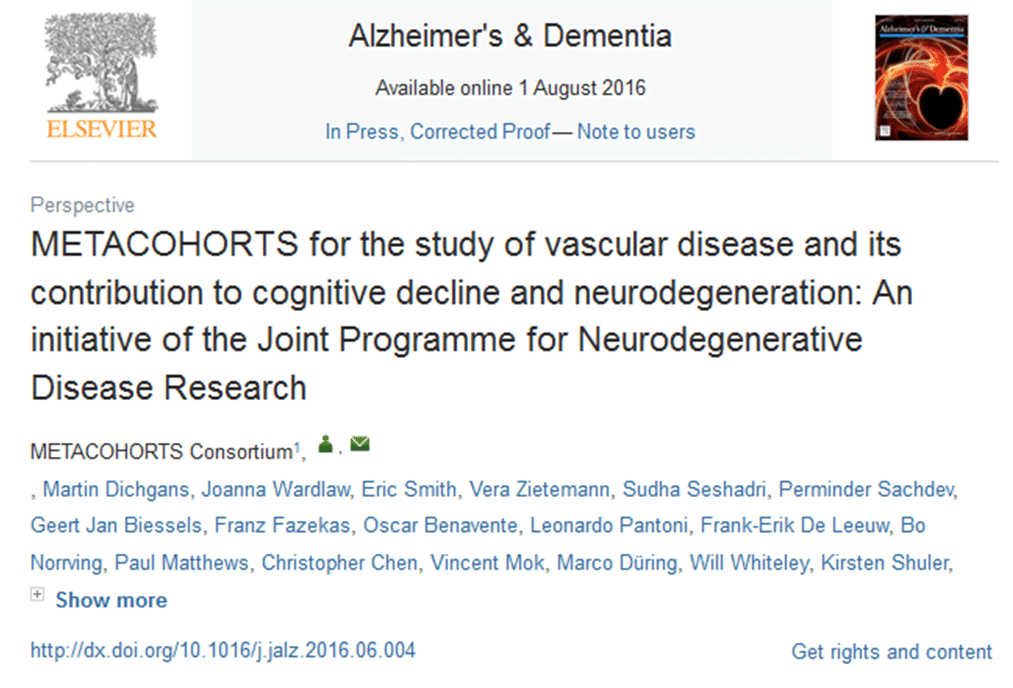 The JPND working group on vascular contributions to neurodegeneration, which was selected under the 2014 call for working groups on cohort studies, brought together 55 international experts on brain disease and dementia to survey the data from more than 90 studies, representing more than 660,000 participants.

The working group’s final results and recommendations were recently published in the journal Alzheimer’s & Dementia. To access the full paper, “METACOHORTS for the study of vascular disease and its contribution to cognitive decline and neurodegeneration,” click here. 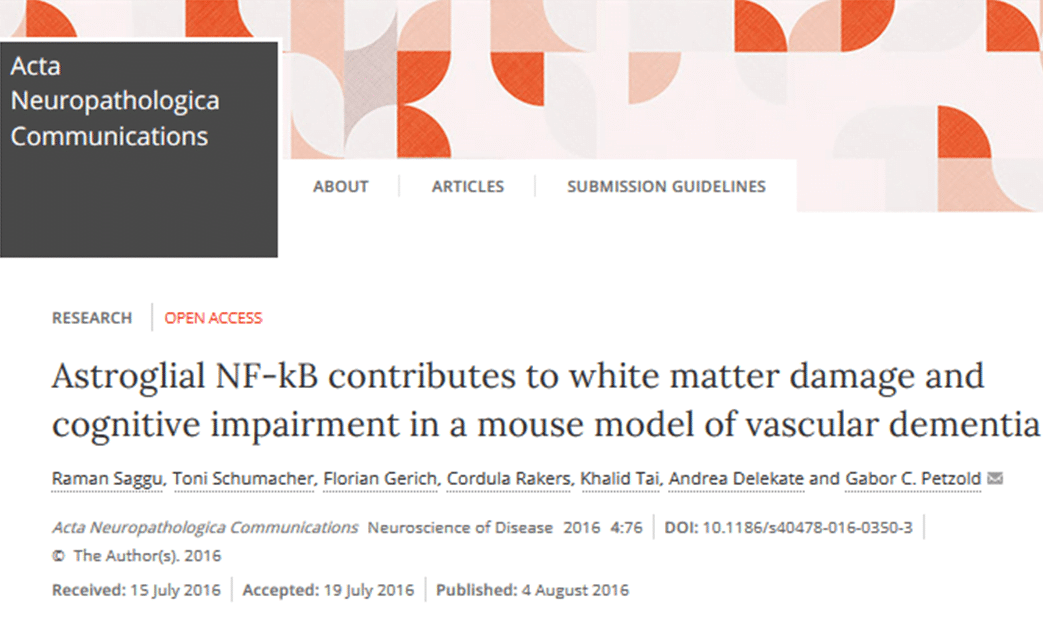 “Astroglial NF-kB contributes to white matter damage and cognitive impairment in a mouse model of vascular dementia” has been published in Acta Neuropathologica Communications. This research was supported in part by JPND through the DACAPO-AD project, selected under the 2015 JPco-fuND call.

While strokes are known to increase risk for dementia, much less is known about diseases of large and small blood vessels in the brain, separate from stroke, and how they relate to dementia. Diseased blood vessels in the brain itself, which commonly is found in elderly people, may contribute more significantly to Alzheimer’s disease dementia than was previously believed, according to new study results published in The Lancet Neurology.

“Cerebral vessel pathology might be an under-recognized risk factor for Alzheimer’s disease dementia,” the researchers wrote.

The study analyzed medical and pathologic data on 1,143 older individuals who had donated their brains for research upon their deaths, including 478 (42 percent) with Alzheimer’s disease dementia. Analyses of the brains showed that 445 (39 percent) of study participants had moderate to severe atherosclerosis — plaques in the larger arteries at the base of the brain obstructing blood flow — and 401 (35 percent) had brain arteriolosclerosis — in which there is stiffening or hardening of the smaller artery walls.

The study found that the worse the brain vessel diseases, the higher the chance of having dementia, which is usually attributed to Alzheimer’s disease. The increase was 20 to 30 percent for each level of worsening severity. The study also found that atherosclerosis and arteriolosclerosis are associated with lower levels of thinking abilities, including in memory and other thinking skills, and these associations were present in persons with and without dementia.

The study examined which cognitive difficulties are caused by vessel diseases and whether vessel disease and Alzheimer’s are more destructive in tandem than they would be alone. An editorial in The Lancet Neurology that accompanied the study findings noted that while other studies have indicated that proactive measures like eating a selective diet and getting regular exercise might protect people against getting Alzheimer’s, those interventions might actually be acting on non-Alzheimer’s disease processes, such as cerebrovascular disease.

The participants in the study published in Lancet Neurology came from two (RADC) cohort studies, the Religious Orders Study and the Rush Memory and Aging Project, which have followed people older than 65, in their communities, for more than two decades. Participants receive annual health assessments and agree to donate their brains for research upon their deaths. The Lancet Neurology study used clinical data gathered from participants from 1994 to 2015, and pathologic data obtained from examination of the brains donated for autopsy, and used regression analyses to determine the odds of Alzheimer’s dementia and levels of cognitive function, for increasing levels of brain vessel diseases.