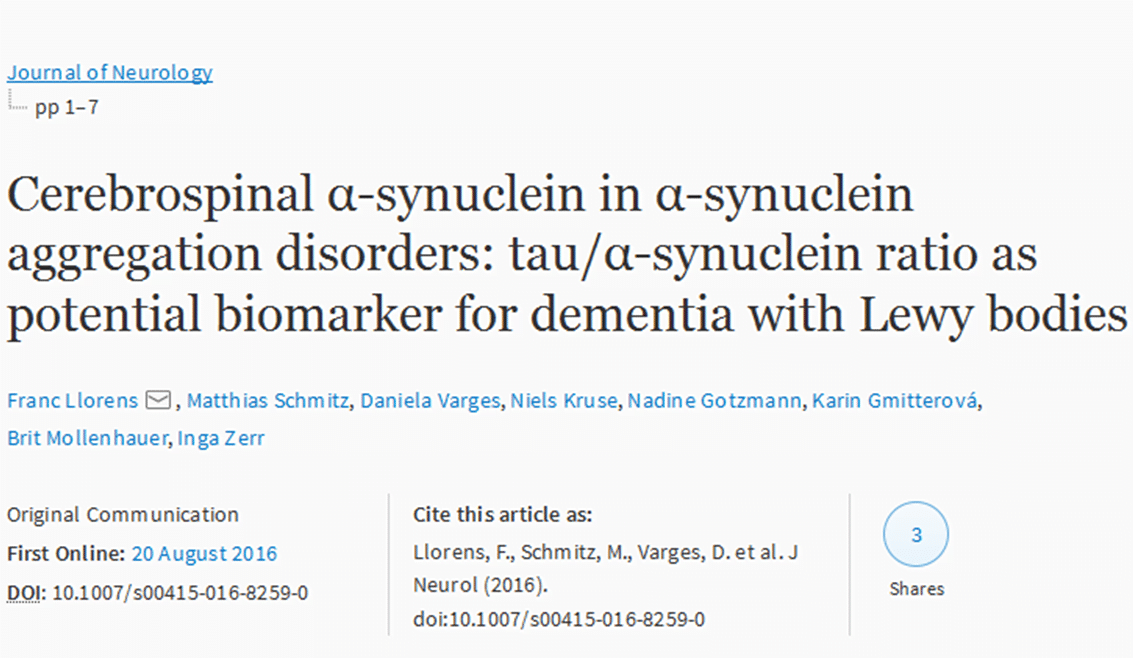 “Cerebrospinal α-synuclein in α-synuclein aggregation disorders: tau/α-synuclein ratio as potential biomarker for dementia with Lewy bodies” has been published in the Journal of Neurology. This research was supported in part by JPND through the DEMTEST project, selected in the 2011 biomarkers call.

For decades, scientists have known that people with two copies of a gene called apolipoprotein E4 (ApoE4) are much more likely to have Alzheimer’s disease at age 65 than the rest of the population. Now, researchers have identified a connection between ApoE4 and protein build-up associated with Alzheimer’s that provides a possible biochemical explanation for how extra ApoE4 causes the disease.

Their findings, which appear in the Journal of the American Chemical Society, underscore the importance of looking at genes and proteins not classically associated with Alzheimer’s to make progress in understanding the disease.

Late-onset Alzheimer’s disease — the subset of the disorder occurring in people age 65 and over — affects more than 5 million Americans, and is characterized by progressive memory loss and dementia. Scientists have put forth a variety of hypotheses on its causes, including the accumulation of protein clusters called beta-amyloid plaques and tau tangles in the brain.

Apolipoprotein E comes in three versions, or variants, called ApoE2, ApoE3 and ApoE4. All the ApoE proteins have the same normal function: carrying fats, cholesterols and vitamins throughout the body, including into the brain. While ApoE2 is protective and ApoE3 appears to have no effect, a mutation in ApoE4 is a well-established genetic risk factor for late-onset Alzheimer’s disease. Previous reports have suggested that ApoE4 may affect how the brain clears out beta-amyloid, but what was happening at the molecular level wasn’t clear.

Scientists had previously uncovered hints that ApoE4 might degrade differently than the other variants, but the protein that carried out this breakdown of ApoE4 was unknown.

To find the protein responsible for degrading ApoE4, the researchers screened tissues for potential suspects and homed in on one enzyme called high-temperature requirement serine peptidase A1 (HtrA1).

When they compared how HtrA1 degraded ApoE4 with ApoE3, they found that the enzyme processed more ApoE4 than ApoE3, chewing ApoE4 into smaller, less stable fragments. The researchers confirmed the observation in both isolated proteins and human cells. The finding suggests that people with ApoE4 could have less ApoE overall in their brain cells — and more of the breakdown products of the protein.

But it’s not just a lack of full-length ApoE or an increase in its fragments that may be causing Alzheimer’s in people with ApoE4. The researchers also found that ApoE4 — because it binds so well to HtrA1 — keeps the enzyme from breaking down the tau protein, responsible for tau tangles associated with Alzheimer’s.

The results need be tested and confirmed in animal studies before researchers can be sure that HtrA1 is the link between ApoE4 and Alzheimer’s in humans. But if they hold true, they could point toward a better understanding of the disease and potential new treatment strategies.

Paper: “HtrA1 Proteolysis of ApoE In Vitro Is Allele Selective”
Reprinted from materials provided by the Salk Institute.

Investigators have discovered a mechanism behind the spread of neurofibrillary tangles – one of the two hallmarks of Alzheimer’s disease – through the brains of affected individuals. In a report in the journal Nature Communications, researchers describe finding that a particular version of the tau protein, while extremely rare even in the brains of patients with Alzheimer’s disease, is able to spread from one neuron to another and how that process occurs.

“It has been postulated that tangles – the abnormal accumulation of tau protein that fills neurons in Alzheimer’s disease – can travel from neuron to neuron as the disease progresses, spreading dysfunction through the brain as the disease progresses. But how that happens has been uncertain,” said Bradley Hyman, M.D., Ph.D., director of the Massachusetts General Hospital  (MGH) Alzheimer’s Disease Research Center and senior author of the report. “Our current study suggests one mechanism at play is that a unique and rare type of tau has the properties we were looking for – it is released from neurons, taken up by other neurons, transported up and down axons, and then released again.”

The current study revealed that, when brain samples from that mouse model were applied to cultured neurons, only 1 percent of the tau in those samples was taken up by the neurons. The tau proteins that were taken up were high molecular weight – meaning that a number of smaller proteins are bound together into a larger molecule – soluble, and studded with a large number of phosphate molecules, a known characteristic of the tau in Alzheimer’s-associated tangles.  Similar results were seen in experiments using brain samples from Alzheimer’s patients, both in cultured neurons and in living mice.

Alzheimer’s disease is characterised by two types of lesions, amyloid plaques and degenerated tau protein. Cholesterol plays an important role in the physiopathology of this disease. Two research teams have shown, in a rodent model, that overexpressing an enzyme that can eliminate excess cholesterol from the brain may have a beneficial action on the tau component of the disease, and completely correct it. This is the first time that a direct relationship has been shown between the tau component of Alzheimer’s disease and cholesterol. This work is published in Human Molecular Genetics.

The first step in this work made it possible to show that injecting a viral vector, AAV-CYP46A1, effectively corrects a mouse model of amyloid pathology of the disease, the APP23 mouse. CYP46A1 thus appears to be a therapeutic target for Alzheimer’s disease.

Conversely, in vivo inhibition of CYP46A1 in the mice, using antisense RNA molecules delivered by an AAV vector administered to the hippocampus, induces an increase in the production of Aß peptides, abnormal tau protein, neuronal death and hippocampal atrophy, leading to memory problems. Together these elements reproduce a phenotype mimicking Alzheimer’s disease.

These results demonstrate the key role of cholesterol in the disease, and confirm the relevance of CYP46A1 as a potential therapeutic target (work published in Brain on 3 July 2015).

Taken together, this work now enables the research team to propose a gene therapy approach for Alzheimer’s disease: intracerebral administration of a vector, AAV-CYP46A1, in patients with early and severe forms (1% of patients, familial forms) for whom there is no available treatment.

An article published in the journal Nature Medicine describes that tau protein isoforms of subjects with Huntington’s disease are similar to those produced in known tauopathies (frontotemporal dementia, Alzheimer’s disease, progressive supranuclear palsy and corticobasal degeneration)

This results in an imbalance in the tau protein isoforms and deposits of hyper-phosphorylated tau in neurons and glial cells in the brain.

The study was developed by CIBERNED researchers from the Center for Molecular Biology Severo Ochoa (CSIC-UAM) in collaboration with the group CIBERNED at IDIBELL and VU University Medical Center, in Amsterdam.

As explained by one of the co-authors of the study, Isidre Ferrer, director of the Institute of Neuropathology IDIBELL and Chair at the University of Barcelona “in Huntington the same abnormal protein deposits of hyper-phosphorylated tau dont occur like in neurons in known tauopathies, but we could identify alterations in the different isoforms of tau protein in the brain and thus demonstrate that tau is also impaired in Huntington and in murine models of Huntington’s disease.