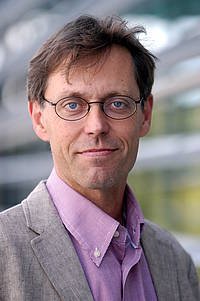 You have been studying Parkinson’s for over 20 years. What is your working hypothesis of what causes this disease?

The past 20 years have seen remarkable progress in our understanding of the causes of Parkinson’s disease. This progress has mostly come from genetic studies. In my opinion the most important progress was to realize that we should not be talking about Parkinson’s disease as a single disease but rather as a syndrome with multiple overlapping phenotypes, pathologic changes and genetic and non-genetic causes. We know that in a small minority of the cases (< 5 %) a mutation in one of several single genes is sufficient to cause the disease with a very high degree of likelihood, if the carrier of the mutation lives to a certain age. This also means that even the most deleterious mutations can be compensated for 30, 40 or 50 years, which in itself is remarkable proof of the resilience of the human brain. In the vast majority of cases however no single cause can be identified and our best guess is that a    multitude of genetic susceptibilities, combined with the effects of environmental or even stochastic (“bad luck”) events on the general background of an aging brain eventually tip the balance to initiate the neurodegenerative process, which then spreads like an avalanche through the brain.  Paradoxically, most discoveries seem to raise at least as many questions as they are able to answer, so even though we have learned a lot about the causes of Parkinson’s disease, it appears that there is always so much more that we have to study that we only now have become aware.

If we lived an ideal scientific environment and you had unlimited resources to do a single experiment, something you could not afford right now, what would you do?

To be honest, I think there is no single experiment that could be done now, even with unlimited resources that would give us final answers. The reason for that is that we do not have the material at hand that we would need for such an “ideal” experiment. Such an experiment would, in my opinion, involve a complete genetic, epigenetic, clinical and environmental characterization of large cohorts of patients with Parkinson’s disease and ideally those who will get Parkinson’s disease in the future, i.e. large population cohorts. If we could follow 100,000 still-healthy individuals, obtain full information about their genetic, epigenetic and proteomic status, acquire complete information about their exposures to toxins, their lifestyle habits and their activities, and then follow this cohort for a number of years to find out who develops PD and who doesn’t, this would be something I would think with high likelihood would give us some very definite answers. Obviously, this is something way beyond our practical reach at this time. But step by step, resources are being built up across many different research groups to eventually allow us to do just this.

In your opinion, what is currently the biggest challenge that researchers have to overcome in order to have an impact on neurodegenerative diseases?

There are several huge challenges that face researchers in neurodegenerative diseases today. We still do not have appropriate models to work with in the laboratory. Human induced pluripotent stem cells are an interesting novel approach, but they yet have to prove their true value. Another challenge is the enormous heterogeneity that we face in neurodegenerative diseases: no patient is really like any other which means that very large cohorts are needed to identify meaningful associations. Another challenge, it seems to me, is that research is still too fragmented. Many different smart people are   working in different labs on similar problems, but the true benefit of linking up all the information that is being gathered is not yet possible. Some form of “cloud researching” may be an answer to this challenge.

What are the real benefits for academic researchers of participation in JPND initiatives?

I think we are all aware that neurodegenerative diseases cannot be solved in individual research groups. Although the creativity of individual researchers is and will always be the driving force of innovation in research, the complexity of the questions to be addressed that range from very basic cellular and molecular biology to the implementation in actual patient treatment are way beyond what a single research team can cope with. The JPND provides a framework across the entire breadth of research activities and therefore provides leverage for each individual group. This is something quite novel.

What kind of impact do you think JPND has had to date on the ND research community in Europe?

I think the response to the previous calls has already shown that the JPND has strengthened the spirit of collaboration across Europe. Even projects that do not receive funding through the JPND may form the basis for future fruitful collaborations and successful applications in other formats.